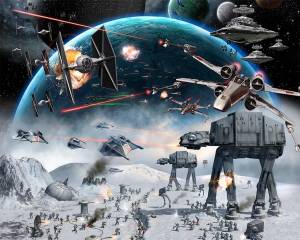 Now the question is… Which characters will we get to learn more about? And how many action figures will they spawn?

I know what you’re thinking… “Really Chris… More Star Wars?” Well I will keep this brief, mainly because there is not a lot of info about this yet.

Lucasfilm has officially announced at least two Star Wars films that will be completely independent of the new Star Wars trilogy (VII, VIII, IX). According to starwars.com these will be spinoffs that will focus on one character each.

This comes as only a mild surprise as Lucas was quoted late last year saying he wanted to dig deeper into past characters from his fan-boy generating franchise. And it is the story lover in me that is actually pretty excited about this notion, especially when screenwriter Lawrence Kasdan (Empire Strikes Back, Return of the Jedi) is involved.

But there is that other side of me that says it is getting to be too much… With the new trilogy coming out and now these new one-off character highlights (which I envision to be a lot like the Marvel super hero movies in the new Avengers lineup) I think of everything else I have seen Star Wars associated with lately. Angry Birds, Clone Wars the TV show, Star Wars 1313 the video game, Star Wars the Old Republic the online game, Star Wars Podz, Lego Star Wars, etc.

I am all for a good story and I do love learning more about the characters in a franchise that has a great story at its heart… especially Star Wars… But is this oversaturation? I don’t doubt that these movies will get the writing attention they deserve… but will it be too much for us as an audience and ultimately make us lose interest in a long-loved franchise simply by shoving it in our faces every day?

All in all, I am still happy to hear about these films… I am sure we can expect a lot to be different in comparison to past Star Wars movies… But in my mind… That is part of what makes it exciting. I just hope I can enjoy the new installments and then walk through the grocery isle without seeing “Star Wars the breakfast cereal” on every shelf.

What do you think about this news Future Filmers?

The Need for Speed Movie: From a Videogame to The Big Screen »
« J.J. Abrams to Direct Star Wars VII

Write Your Comments Below Cancel reply